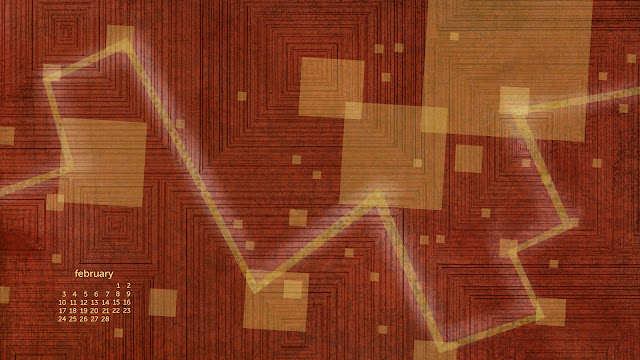 Oh, I know it's a day early. What are you gonna do?
No comments: 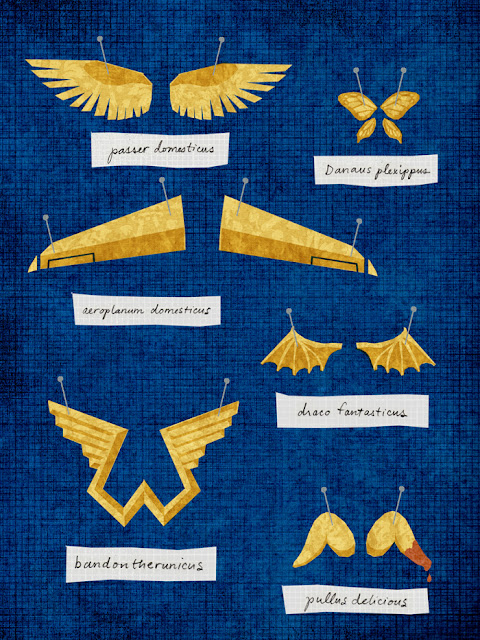 Always Write Notes To Yourself

I was looking at my bookshelf this afternoon and saw Laurie Rosenwald's great New York Notebook - half blank notebook, half insider's guide to fun stuff in NYC - and took it down to flip through, when  a handful of business cards fell out from between its pages. Apparently, I had gathered a few from stores and restaurants (okay, honestly, mostly restaurants) I had liked when I was last there with friends in 2010.

What I had completely forgotten was that I had written little notes on each of the cards - notes to remind myself why I had picked up that card, notes that captured that particular moment in time, there, in New York. I don't know if they'll be evocative to anyone else, but they were so delightful to me. I can picture each and every one of these places.

Some of the notes are very straightforward: I ate this here. Some are a little naive (did I really call Williamsburg dirty?), but all of them make me smile. 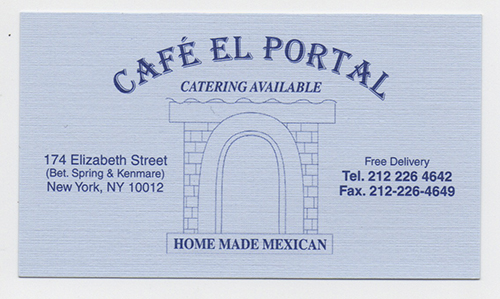 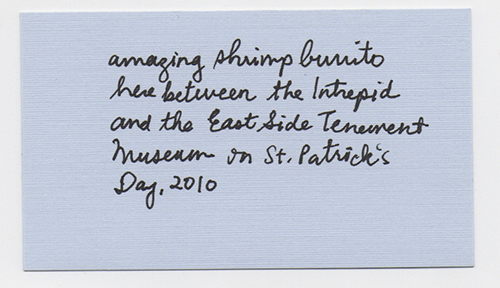 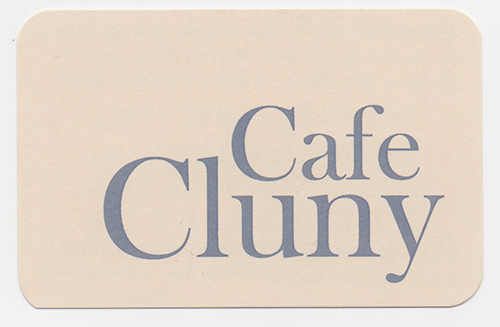 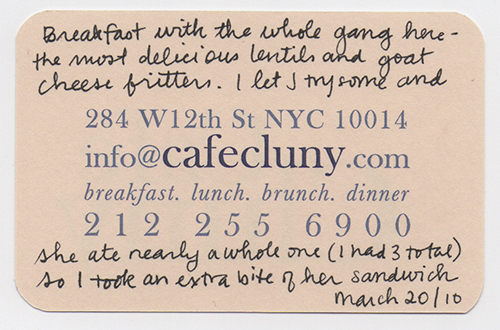 "Breakfast with the whole gang here - the most delicious lentils and goat cheese fritters. I let J try some and she ate nearly a whole one (I had 3 total) so I took an extra bite of her sandwich. March 20/10"
Even when you're on vacation, there's always time for a little spite. 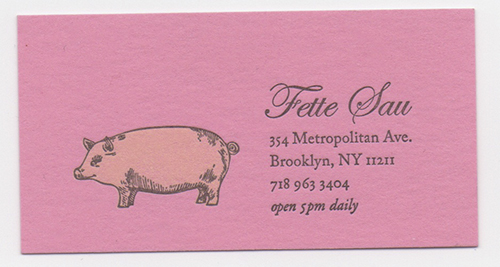 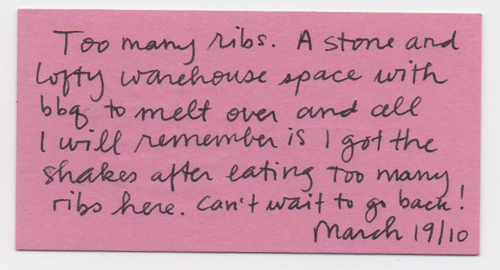 "Too many ribs. A stone and lofty warehouse space with bbq to melt over and all I will remember is I got the shakes after eating too many ribs here. Can't wait to go back! March 19/10"
Those ribs were as big as my face. 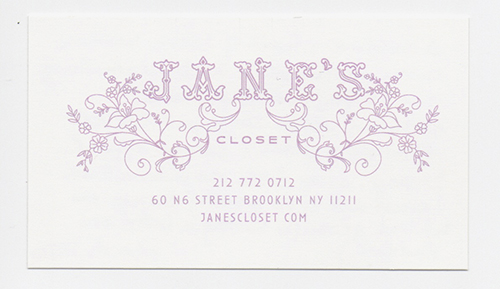 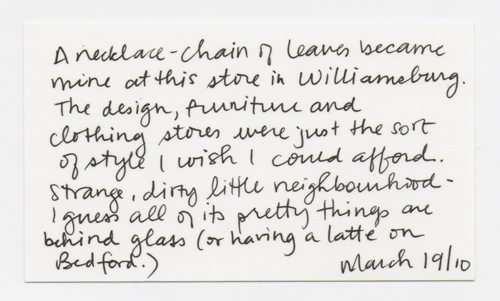 "A necklace-chain of leaves became mine at this store in Williamsburg. The design, furniture and clothing stores were just the sort of style I wish I could afford. Strange, dirty little neighbourhood - I guess all of its pretty things are behind glass (or having a latte on Bedford.) March 19/10" 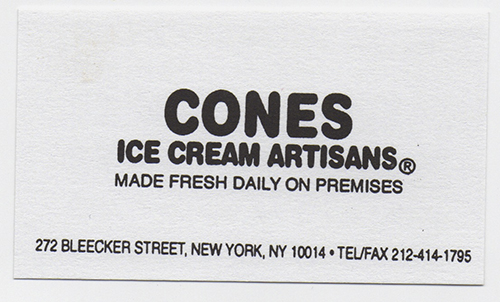 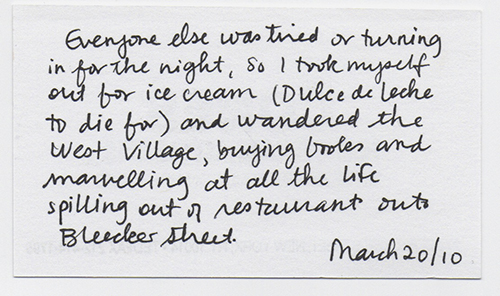 "Everyone else was tired or turning in for the night, so I took myself out for ice cream (Dulce de leche to die for) and wandered the West Village, buying books and marvelling at all the life spilling out of restaurants onto Bleecker Street. March 20/10"
Even on group trips (especially on group trips), it's important to have solo time. 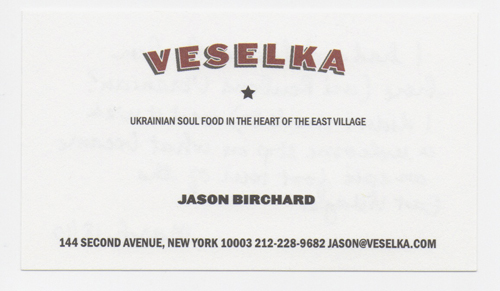 "I had a delicious Reuben here (are Reubens Ukranian? I didn't think so) but it was a welcome stop on what became an epic foot tour of the East Village. March 18/10" 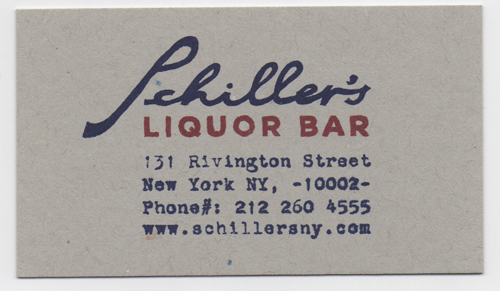 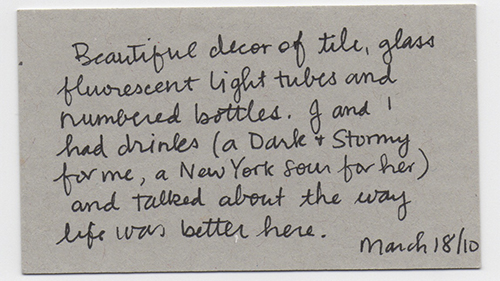 "Beautiful decor of tile, glass, fluorescent light tubes and numbered bottles. J and I had drinks (a Dark & Stormy for me, a New York sour for her) and talked about the way life was better here. March 18/10"
Yeah. 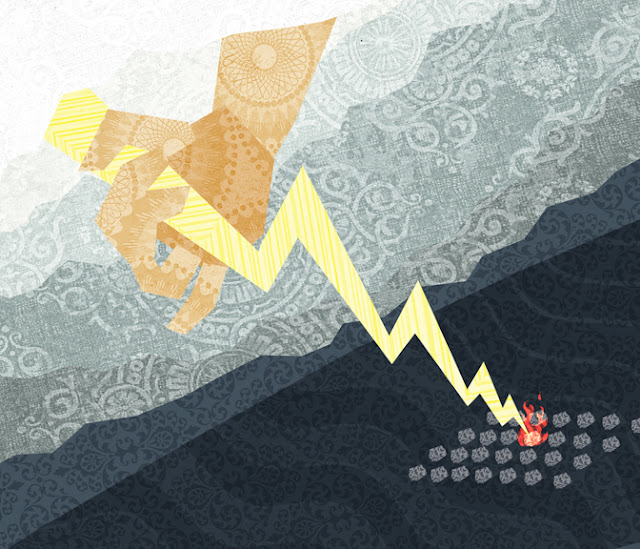 I'm having a smite-y kind of day. Did you know that yesterday was Blue Monday, the saddest day of the year?  Smite! Smite! Smite!
1 comment: 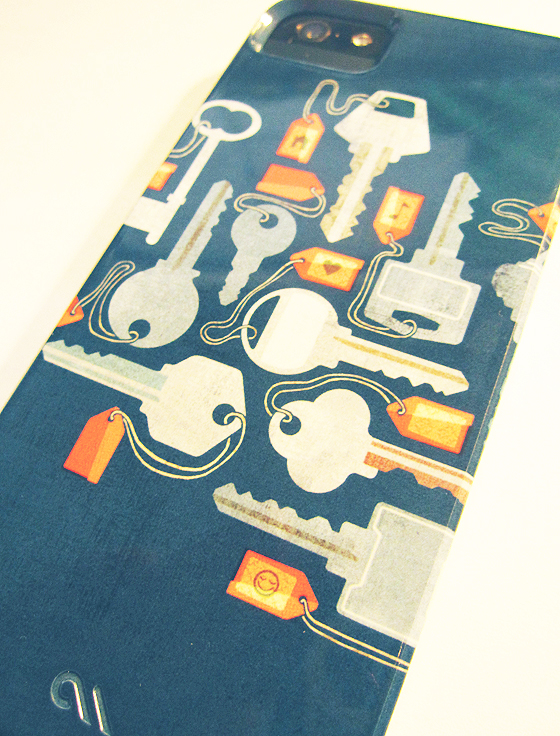 My new iPhone 5 case just arrived from Society 6 (sporting one of my Keychain illustrations). It's a particular kind of thrill, seeing something you drew on a physical object. Note to self: get into surface design...
No comments: 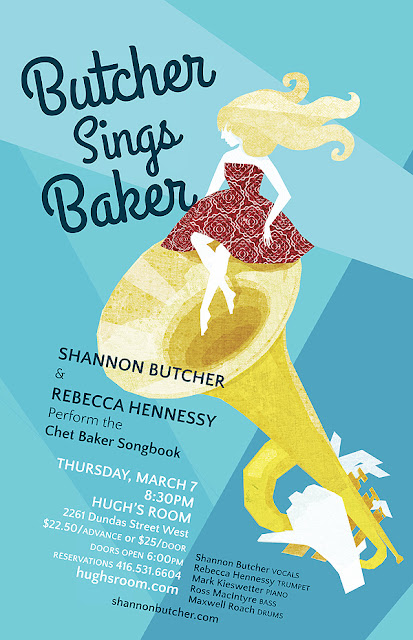 This past week I've had the absolute pleasure of working on this poster illustration and design for Shannon Butcher, a jazz singer who lives here in Toronto. This Hugh's Room show in March will be Shannon's take on the Chet Baker songbook, so I had a lot of fun sketching concepts while listening to Chet's albums and researching 1950s jazz posters. Also, I looked at a *lot* of photographs of trumpets. Can I just say this: foreshortened reflections on a shiny, round surface? Yeah.

Anyway, I'm really happy with the result. (Am I allowed to say that?)  It was fun to mix a kind of  romantic whimsy with hard angles and geometric shapes. 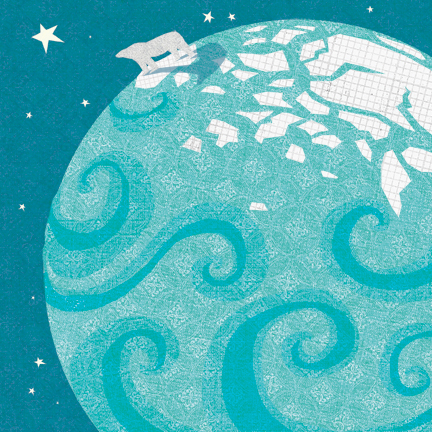 I can't remember the last time I posted anything for Illustration Friday, but it's definitely been on my mind for a while. I'm not a resolution-maker, but I would like to make better use of my free time. The weekly topics from IF are great practice for quick, loose illustrations on a theme, and I need to start doing more of them.
5 comments: 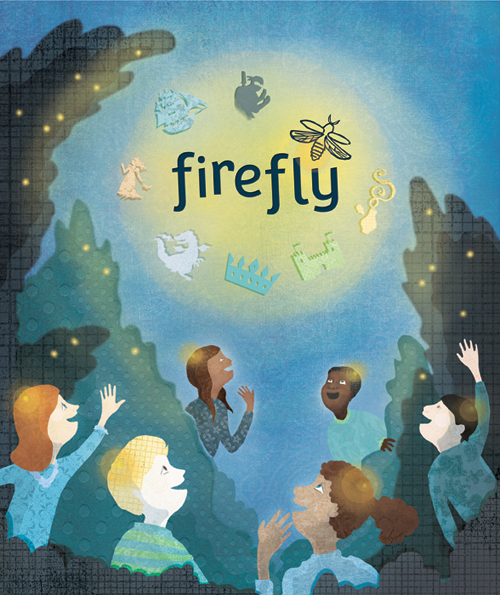 Here's an illustration I finished at the end of last year for a children's theatre company. They do this fantastic project with kindergarten-aged children where they go into the class and help them develop short stories about whatever they like.  (The compilation I read was peppered with ninja references). The kids write the stories, draw pictures to accompany, and then act them out for the whole class.  The theatre company then assembles all of their stories and pictures into a booklet for the classroom and this will be its cover!

(My friends and I used to do this in grade 4. So what if we were really too old by that point and the storylines I'm sure made no sense, but, whatever, the teacher got a 20 minute break, and no one ever gave us a book at the end of it.)
No comments: