A beer that can solve crime...in Hawaii

My friend Ian makes beer in his basement. Now, although that may not sound like the most delicious thing you've ever heard, trust me, his beer is goooood. And, lucky for me, I'm usually around when new batches are ready for tasting. (I have really good timing. Also, I'm over at Ian and his wife Avery's house a lot, um, watching the Bachelor.)

Ian likes a lot of different kinds of beers, but I would guess that most of his favourite beers are IPAs or India Pale Ales - especially the American IPAs which are usually made with extra hops and are known for a punchy, citrusy bitterness. One of the beers he brewed recently was an IPA made with a type of hops called Magnum. Which, of course, led to the best beer name of all time: 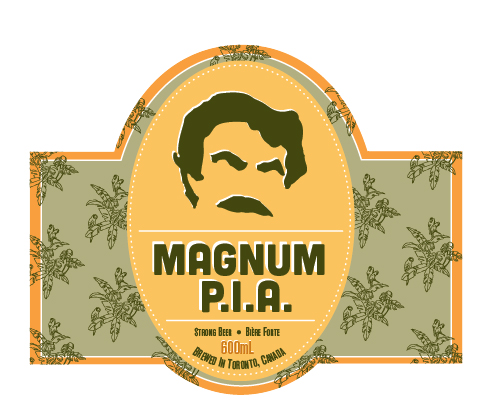 I just had to make a label for it.  You don't think Mr. Magnum himself would mind, do you?


Ian doesn't sell his beer (yet) but he is a longtime friend of the brewmaster at Sawdust City - an independent brewery that has a brewpub in Gravenhurst, Ontario - and when they get together they make some pretty sweet concoctions. (I'm still talking about beer).

That is hilarious, and an awesome label design!