Where Do We Go From Here 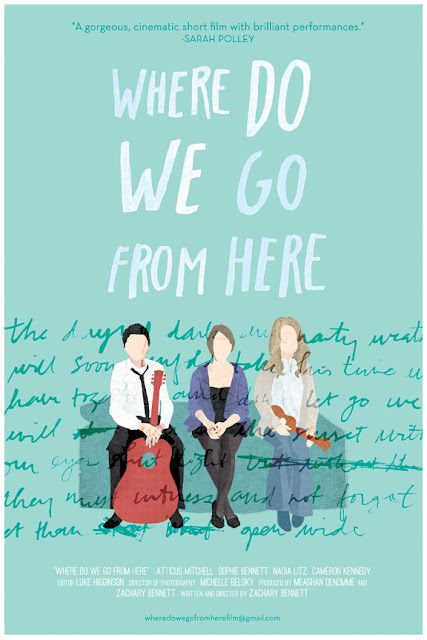 The talented creative team behind this beautiful short film (writer/director/producer Zachary Bennett and producer Meaghan Denomme) contacted me just as they were finishing the final cut, and were looking for a poster and DVD sleeve design.  In the film, the characters share the loss of someone close:


Set in a safe and unassuming Ontario suburb, the film follows seventeen-year-old Elliot (Atticus Dean Mitchell) as he learns of the sudden death of his older brother, Tyler. Flanked by his older sister, Sasha (Sophie Bennett) and Tyler's girlfriend, Abby (Nadia Litz), Elliot tries to find peace in the music Tyler left behind.

First-time writer/director Zachary Bennett paints an intimate and emotionally raw portrait of three lost souls looking for answers to a death that no one saw coming.  Where Do We Go From Here explores the inevitable transformations that a loss can bring to a life.

As you might imagine, the film is full of beautifully melancholy music, and it was important that that was reflected in the poster.  Zach sent me a few production stills of the image he wanted illustrated, which I did using digital collage.  Then, using a sharpened chopstick dipped in black ink, I wrote out the lyrics to one of the pivotal songs in the film. (I find that a chopstick gives me a really pleasing blobby and scratchy (yes, those are technical terms) ink line - even more so than a nib).  I then laid everything out in Photoshop.

The film is being submitted to a circuit of film festivals so please wish them luck.  I really think that more people should see this little gem (and I'm not just saying that cause I made the poster). If you're interested in knowing more, Meaghan has a great post about making this film on her delightfully entertaining blog Tight In The Knees.