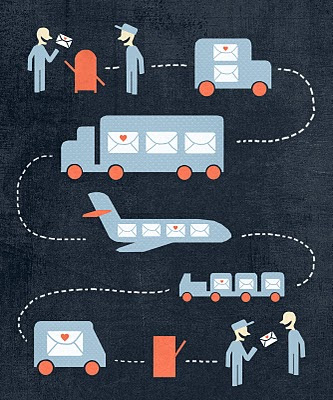 So, when you're late in posting the previous week's Illustration Friday drawing, and then are super-duper early in posting the next week's, then you get TWO Illustration Friday drawings in TWO days.
Which is almost unbearably exciting, I know.
When I began brainstorming about transportation, I immediately tried to think of an object to be transported. As soon as I got the image of a letter in the mail, it just clicked. I suppose letters are nearly archaic now - just see how many forms of transportation are skipped with a simple click of the "Send" button - but it's hard to deny how much pleasure I get when I see a letter in my mailbox. A letter that isn't a bill or a statement, I should say. I don't get much pleasure from those at all.

Love the idea. The look and feel is great too.

This is a fabulous idea!! I love the little story in your illustration and the graphic simplicity. It's lovely!!!

This is so wonderful. So thought-provoking. And love the simplicity and great color combo.

I love this, the illustration style is really nice!

Fantastic idea. love the color use, too, and the heart.

really great illo
you've got it!

This is excellent! Great take on the theme!